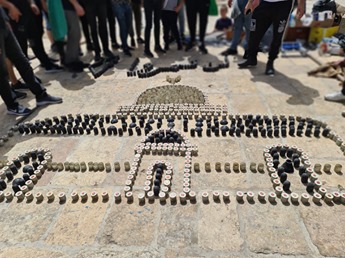 Scroll down for the latest news; the focus is on social media and internet related issues within this catastrophic sequence of events associated with al-Aqsa, Sheikh Jarrah, Palestine and Gaza. I am re-purposing tweets and other content, in an attempt to develop a time line. Please be patient as the page loads - there's (unfortunately) a lot of content:

live updates of social media associated with this situation in Jerusalem and the Sheikh Jarrah neighbourhood.

A Palestinian man praying salah while Israeli forces gather around behind him, attacking people at the Masjid al-Aqsa. pic.twitter.com/17OT38BhHj

STOP AND LISTEN !! the people of Palestine themselves are saying that if u raise awareness by using the tags on social media, it will help them out so much !! people need to be aware as to what is happening. so please use your platform !

Trees in the Al Aqsa compound caught on fire and settlers celebrated with music and dancing.

Absolutely sickening and I imagine we’ll see no news coverage or headlines or panel conversations pathologizing an entire religious group based on this. https://t.co/zO4vwUxvdd

“People were going on the holiest night of Ramadan, Laylat al-Qadr, to pray… look at the hundreds who have been injured.”

Head of Palestinian Mission to the UK @hzomlot talks to #Newsnight about the spiralling violence which has triggered airstrikes and rocket attacks pic.twitter.com/dMgChzgUKH

“People were going on the holiest night of Ramadan, Laylat al-Qadr, to pray… look at the hundreds who have been injured.”

Head of Palestinian Mission to the UK @hzomlot talks to #Newsnight about the spiralling violence which has triggered airstrikes and rocket attacks pic.twitter.com/dMgChzgUKH

“Do Palestinians have a right to self-defense?”

Up to 29 children including a 1-year-old were injured, says the UN. pic.twitter.com/d3UaR1Uvk2

An Israeli officer dragged 26-year-old Palestinian Mariam Afifi by her hair. Her response? To smile in the face of occupation.

How has smiling become an act of resistance for young Palestinians? pic.twitter.com/cwyCdukKMe

... in case you were wondering. This is how it is done. https://t.co/gWYGEKLh0R

Trying to describe how such scenes feel when watched from the window, some Palestinians on social media say it is "a smaller version of the doomsday."

Listen to the horror in her voice and see the pain that the #Israeli warplanes are capable of.#GazaUnderAttack pic.twitter.com/Qx1e9q82oO

Protests are being held across the world to stand in solidarity with Palestinians and to condemn Israel’s deadly airstrikes on the Gaza Strip ⤵️ pic.twitter.com/wjhw6ru9NS

🚨 #ICC Prosecutor #FatouBensouda on the recent escalation of violence in #Gaza, the #WestBank, including #EastJerusalem ⤵️ pic.twitter.com/jZlns3d92I

BREAKING: An Israeli airstrike has killed Gaza City commander Bassem Issa who is the highest-ranking military figure in Hamas to be killed since the 2014 war.

Our defence and security correspondent @AliBunkallSKY has the latest.

Israeli airstrikes in Gaza have now killed at least 119 Palestinians — over 40% of victims were women and children.


you will find no one who can endure what people in Gaza have been facing their whole life, they have fired 2000 rockets in this last week, they have killed people including kids and destroyed so many homes and buildings #GenocideinGaza #GazzaUnderAttack pic.twitter.com/TV1JVoJGhP

I feel disabled sitting in my home just sharing hashtags , I am sorry for you Palestine.
My heart is bleeding.#PalestineUnderAttack#GazzaUnderAttack pic.twitter.com/HqtzVPasOh

Children in Gaza still celebrating Eid during ongoing Israeli air strikes. This should never be normalised.

Eight children were killed in an Israeli air raid on the Shati refugee camp in the Gaza Strip, where up to half the population are children.

This photo of a baby pulled alive from the rubble is both harrowing and remarkable.

Trying to distract his children during the Israeli attack and make them happy during Eid, Ahmed Almansi recorded a YouTube video to document the day. You can clearly see how afraid they are and what ways he tried to help them feel safe, until he was killed.#Gaza_Under_Attack pic.twitter.com/HKFfDOiaaB

This is in one of the most densely populated places on earth (denser than London). And half the population is under 18. https://t.co/b0f4oEPCtV

[AFP/Dawn, Media houses 'shocked and horrified' by Israeli attack on their office building in Gaza](https://www.dawn.com/news/1623774)

"The White House, which has kept a relatively low profile on the violence, said on Saturday it has cautioned Israel about the importance of protecting independent media." I don't think that worked, somehow. So, what's next?

a small girl in Gaza speaks after her whole house was destroyed by Isra*li strikes. Horrifying. pic.twitter.com/Yk8wa2e0V1

This 5-month-old baby boy’s mom and four siblings were killed in an Israeli airstrike in Gaza City. Baby Omar was visiting relatives on the second day of Eid with his mom when the airstrike hit.

He was the only survivor. pic.twitter.com/KPnqTDH64Q

Great to see Hamza Choudhury picking up his medal with a Palestinian flag.#FreePalestine https://t.co/1MoheREjIT

We were blown away by the sheer number of human rights defenders who took to the streets of London, across the UK and all over the world 🇵🇸

Join us next Saturday for our National Demo for Palestine👉 https://t.co/XcAEDKkU8u

Pleased to speak at the Justice for Palestine rally today #AqsaUnderAttack pic.twitter.com/RyV1pT7E5b

“Years of quiet” for who, @NYTimes? Not Palestinians. Such irresponsible reporting, even as the article aims to provide context. #SaveSheikhJarrah https://t.co/MA2mq5yN7G

.@iamjohnoliver on the problem of both-sides’ing the Israeli assault on Gaza. Not complete segment. pic.twitter.com/caxDHgbtsm

Extraordinary photo from Gaza on the front page of The Guardian today - six year old Suzy Eshkuntana pulled alive from the rubble 7 hours after an Israeli air strike that killed her mom and all four of her siblings pic.twitter.com/nVDKuu3GoL

Groups call on @Facebook, @Twitter to stop censoring and to reinstate accounts and content documenting Israeli violations against Palestinians, to open an investigation into such takedowns and to share the findings publicly. https://t.co/wieJRmBYx7 Artwork: @khalidalbaih pic.twitter.com/ChyYnXX2x6

Indeed - can’t stress enough the importance of recognising the bravery of local journalists in Palestine at this time - particularly local women journalists, who are risking so much to report the news despite the personal toll the situation inevitably takes on them https://t.co/VcL1FGQz9S

The only democracy in the Middle East respecting and protecting the free press. Today, Damascus Gate. pic.twitter.com/wZuWVMGPrQ

Israel-Gaza: Why is the region blurry on Google Maps? - https://t.co/tCeZsA6KpO

In pictures: Fear and mourning as Israel-Gaza violence rages on - https://t.co/aCnKFacvyN

Israel’s social media is citing Islamic holy scripture alongside bombs as taunts to Palestinians—wiping out whole families and the using the Qur’an to crow about it https://t.co/wx3PWiBXTC

We sadly confirmed today that 11 of over 60 children killed by Israeli air strikes in #Gaza over the last week were participating in our programme helping them deal with trauma.
All of the children between 5 and 15 years old were killed in their homes https://t.co/olwHmvNpWP

As Israeli PR goes down the toilet, watch out. They are known for undercover /false flag operations.@LinahAlsaafin's article "Musta’ribeen, Israel’s agents who pose as Palestinians."https://t.co/u9qqNXooME

This is exceptional* truth-telling journalism from @Stone_SkyNews calling out the brutality used by Israel against protesting Palestinians rather than presenting an artificial "both sides" narrative as if occupier and occupied are equal.

*It shouldn't be the exception but it is. pic.twitter.com/ug10EUUmfc

.@markaustintv signs off from Jerusalem tonight with such a sad story. Children, being treated for trauma, killed in the airstrikes. pic.twitter.com/GS56ovo3Kc

“When this war came, we forgot corona,” Dr. Midhat Abbas said. “Corona gives you days and then maybe you live or maybe you die. But now [Israel] will kill an entire building at once.” https://t.co/xTeDeWWwWl

A group of Jewish Google employees urge the company to support Palestinians and condemn actions of the Israeli military: Report ⤵️ https://t.co/TmayonCm29

Remember this the next time @HouseForeign or @SenateForeign committee members hold a hearing on incitement in schools in Israel/Palestine because they sure won’t. https://t.co/Q3TT5Aat8i

A father in #Gaza: “I did the strangest thing today - I exchanged my children with my brother’s. I took two of his children, and gave him two of mine. So in case I get bombed, one of mine will survive & if he gets bombed, one of his will live on.” https://t.co/Yo0XZJAVMg

This is an amazing illustration, using a Snapchat feature, of how much of a lie it is to call this a “war” or “conflict”. https://t.co/fyI7fFuG4D

Samir Mansour Library is one of the largest libraries in the Gaza Strip ,it destroyed completely by Israeli warplanes💔💔#GazaUnderAttack pic.twitter.com/QwwRODblHE

Would our hearts and souls feel differently if this footage was taken in another city? Have we become so desensitized to images of Palestinians being killed on camera, their bodies pulled from the rubble that we watch videos like this, look away and simply go on with our day? https://t.co/hLi2lFfdqJ

What is Israeli military occupation and how does it shape every part of Palestinians’ lives?

I come from a town on the Mediterranean called Deir el-Balah (Arabic for monastery of dates). My town is known for being a peaceful place to the extent that it’s a running joke in Gaza. People like naps and are very generous and peaceful. This is what my town experienced today. pic.twitter.com/AOuKdWIxM9

This is a living hell. It is incredibly difficult to watch.

But this is the reality of what is happening in Gaza. pic.twitter.com/IUiIC9eisl


Hours after a ceasefire was declared, clashes between Palestinians and Israeli security forces broke out at Jerusalem's Al-Aqsa Mosque compound today. Our report from the scene: pic.twitter.com/HFyCCFg4B3

More than 70 children have been killed in the Israel-Palestine conflict. These are their names and faces https://t.co/TOD0mpBcoz

Witnesses say some Palestinians stayed after Friday prayers to celebrate the ceasefire. Police claim there were "riots." pic.twitter.com/Mb8GWgT5OJ

This is such a brave move by a principled journalist, highlighting the failure of Israeli newspaper @haaretzcom to act as journalists: